Nimirnthu Nil directed by Samuthirakani gets derailed because of the confusion in treatment, whether to go commercial or stick to its heart. Made in the same platform of many Shankar films, this movie had the scope to become an influential film like Rang De Basanthi, but the compromises made to make it look filmy reduces the heat.

Story focuses on the attempt by Aravind Sivasamy (close to Aravind Kejrival) to eradicate corruption from the system. Many negative experiences in real life forces him to do something to clean the system that runs on corruption. For that he traps a section involved in it by creating a non existing person. He bribes these officials to create all legal formalities like birth certificate, voters id , ration card and even an arrest warrant for that person to show the world how ignorant and irresponsible these officials are. The 147 officials who got screwed because of this sting operation decide to sack Aravind. How Aravind succeeds in this operation in which he had to face many odds.

The anti corruption agenda starts rolling from the very beginning of the movie and that was a really abrupt way to approach the plot. Then there are a lot of sequences which will certainly remind you of Ambi in Anniyan. But after this particular phase there is a reasonably good elevation in the plot and Samuthirakani succeeds in establishing the reason behind his intention to make this movie with some stern dialogues that will impress you. The tactics to spread this cause, live coverage from moving container lorry and raising valid questions etc were really good. Even though the ridiculous cameo of Sarath Kumar disturbs the rhythm of the movie, you will still feel that something really inspiring might happen in the second half but sadly the lookalike idea used in the second half takes away that maturity the film showed in the first half. When you look at the climax of the movie, the necessity of that second half fight involving Pajero and a tempo traveller looks totally irrelevant. Many such logical questions start to unfold in your mind as the film approaches its climax.

On the performance side, Jayam Ravi was really good in his dual avatar. Amala Paul’s character was quite irrelevant and it could only create some unnecessary songs in a serious subject. Soori was the actor who really impressed me in the movie. He was introduced as that typical hero friend/comedian but he did a really good show. As I said, Sarath Kumar’s character is just there to make the star list big for the film and doesn’t help the movie in anyway; in fact it was painful to see his acrobatics with the SUV in the pre interval section.

Samuthirakkani’s direction in this one was impressive occasionally. But his scripting which lacked freshness in terms of treatment becomes the negative here. Our mind will easily go for comparisons with Anniyan, Muthalvan, Indian etc and the second half twist which may take this movie away from those comparisons was not that effective. Dialogues were pretty good. Cinematography was average. Stunts were disappointing. Songs are okay but placement was never okay. Edits are average and the background score was nice.

Nimirndhu Nil was an attempt to create a wave which got flawed by the filmy creativity. The performances and the facts and fire in some of the sequences were appealing but the script that lacked freshness causes the damage. I am giving a generous 2.5/5 for this ambitious effort. 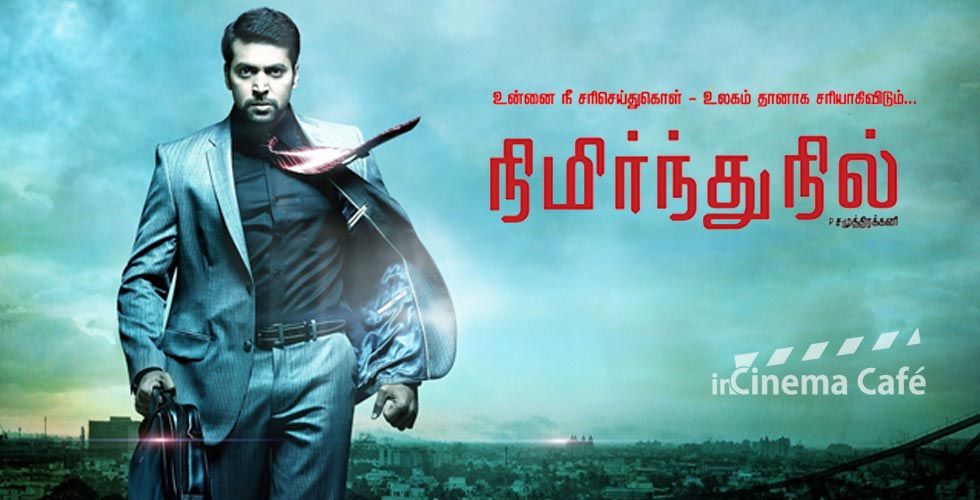 Orange: The In-Between Ones

Founder and editor of Lensmen Reviews.

View all of Aswin Bharadwaj's posts.

13 Years of Up in the Air Director: Jason Reitman

An Action Hero Movie Review (Full Review Link in B

5 Years of The Shape of Water Director: Guillermo

Looking for a Review?